How do plants ensure adequate phosphorus nutrition in phosphorus-impoverished soils?

Microorganisms, e.g. bacteria or fungi, naturally colonize plants and even form complex communities. While some of these interactions between plants and microorganisms are beneficial for the plant, others are rather classified as parasitism and hinder plant growth and development.
One example for a beneficial association between plants and microbes is the arbuscular mycorrhizal symbiosis, which most likely has facilitated the adaptation of plants to terrestrial life. A substantial number of plant species receives phosphorus and other nutritional elements due to this symbiosis and influences plant fitness. In exchange, the arbuscular mycorrhizal fungi receive photosynthates from the plant.

Therefore the authors, which are mainly working in the Cluster of Excellence CEPLAS (Juliana Almario, Ganga Jeena, Alga Zuccaro, George Coupland and Marcel Bucher) analysed and sequenced the fungal microbiome in the rhizosphere (the soil surrounding the root) and in the roots of the model plant Arabis alpina. They repeatedly detected 15 fungal taxa in the roots and assumed that they may play an important role for plant nutrition. Interestingly, one of those fungal taxa was abundantly detected in A. alpina plants, which were growing in soils with low phosphorus content, indicating that this fungus may facilitate phosphorus uptake of the plant. To further analyse this hypothesis the authors isolated the fungal species and applied it to soils with extremely low phosphorus content. As assumed, the fungus-enriched soils promoted the growth of A. Alpina plants. Furthermore, the authors were able to detect an accumulation of phosphorus in the shoots of those plants.
Taken together, this study nicely demonstrates that as well nonmycorrhizal plants form symbiosis with specific fungus to facilitate phosphorus uptake and thereby ensure adequate phosphorus nutrition. 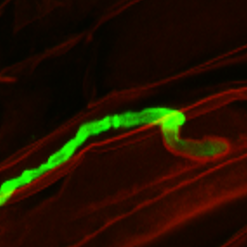